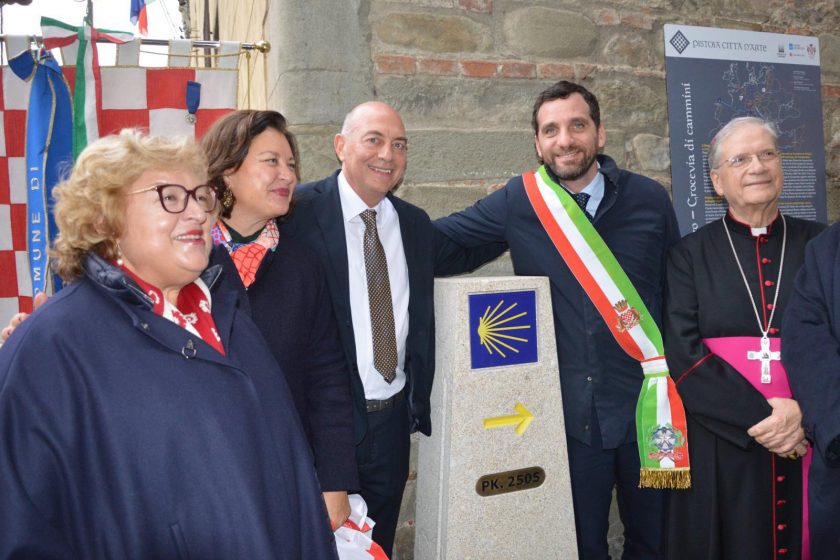 The Xunta de Galicia signposted the Way of Saint James in the Piazza del Duomo in Pistoia (Italy) with the installation of a milestone 2505 kilometers from the Galician capital. The milestone joins the two cities and strengthens the town of Pistoia’s historic ties to the Way of Saint James. Xacobeo 21 commissioner, Cecilia Pereira presided over the ceremony, accompanied by the mayor of Pistoia, Alessandro Tomasi, the Bishop of Pistoia, Fausto Tardelli, prefect of the province of Pistoia, Emilia Zarrilli, and by the councillor of the Presidency, Institutional Relations and Tourism of Santiago de Compostela, Gumersindo Ginarte.

After the unveiling of the milestone, the commissioner participated in a meeting on the Camino de Santiago and the Xacobeo 2021, which included speeches by professor and chairman of the International Committee of Experts on the Way, Paolo Caucci von Saucken, and doctor and professor, Lucia Gay, among other specialists in the Jacobean pilgrimages.

In addition to bringing both areas closer to each other, this institutional trip allowed various matters to be discussed, such as the preparations of various actions to promote the Way of Saint James in Pistoia, a city that, during the next Compostela Holy Year, will have the papal privilege of opening a Puerta Santa. Pistoia is the only city in the world, other than Santiago de Compostela, that has had a genuine relic of St. James the Apostle.