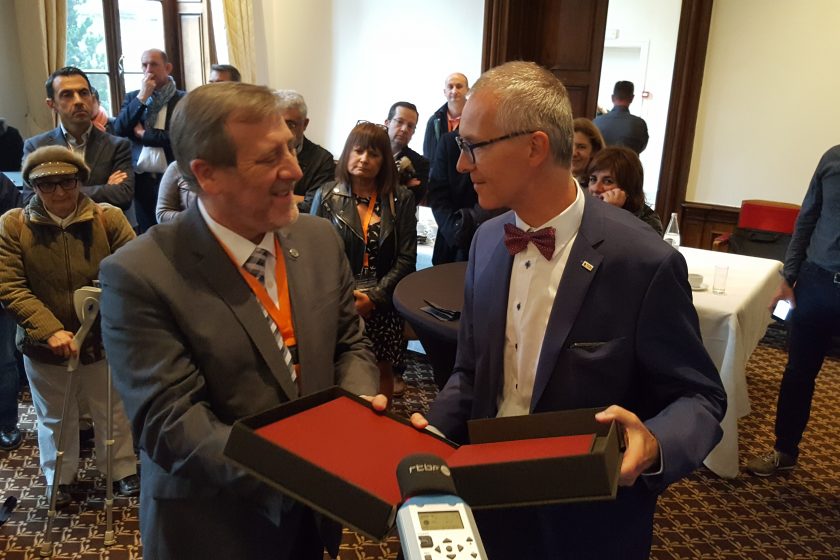 Directors and members of the participating associations, representing the various routes of the Camino in Galicia, will arrive in Brussels at midday on 8 May. They will then travel to the city of Namur, whose long history of pilgrimage to Santiago emerged in the Middle Ages and has continued down to today. Among other events in that city, the representatives will take part in a ceremony commemorating the 30th anniversary of the 1987 declaration of the Way of St. James as the foundational European Cultural Route.

The celebration will be held at the Provincial Palace, where authorities from the province of Namur, headed by the director of the Tourism Federation, François Malacord, will present a letter of membership in the European network of routes to Santiago de Compostela. They will also unveil a commemorative plaque, present a stamp of St. James and announce the strategic guidelines of the socio-cultural development plan for the Way of St. James in this Belgian province.

During their entire stay, the Galician associations will be accompanied by public representatives of the city of Namur and Belgian Way of St. James associations, as well as Euro-MP and co-chairman of the aforementioned Intergroup on Tourism and Heritage, Galician native Francisco Millán Mon, together with Xacobeo Director/Manager Rafael Sánchez.

Tuesday the 9th will be devoted to visiting the cities of Bruges and Ghent, which, like Namur, have a long Jacobean tradition. Among other activities, the representatives will view heritage sites associated with the Way of St. James.

On the morning of the 10th, the Galician delegation will visit the European Parliament, where they will take part in a ceremony with representatives from the Intergroup on Tourism and Cultural Heritage: Way of St. James, led by the co-chairman, Francisco Millán Mon. They will also visit the Galicia Europa Foundation, where representatives of European organizations will present information about current possibilities for participation in development projects around cultural routes.

The Camino within the new rebuilding of Europe

The last scheduled activity will take place that evening at 7.00 pm at the Cervantes Institute headquarters in Brussels. This will be a round table discussion organized by the institute, titled Rebuilding Europe through the Way of St. James.

With the famous quote by German writer Goethe (1749–1832), ‘Europe was born in pilgrimage’, as their starting point, representatives from various Jacobean associations on the continent will discuss ‘how the pilgrimage to Santiago can contribute to rebuilding a common European project founded in tolerance, respect, freedom and solidarity in the current context’.

After the discussion, the Galician Centre of Brussels will offer a presentation on Festival Compostela, a selection of cultural activities around Galicia and the Camino to be held in the Belgian capital on 3 and 4 June.

The Galician delegation will return to Santiago on Thursday, 11 May.